The Tynan was a Belter gunship, later converted to a torpedo boat, of the Outer Planets Alliance (OPA) Navy. It was based at Medina Station between missions.

The OPAS Tynan was captained by Klaes Ashford and used by the OPA Navy for anti-piracy operations. It was protecting the UNN freighter Amberjack on a UN-MCR supply route when it was attacked by pirates.[3] The Tynan knocked out the pirate ship and captured one of its crew in a vac suit.

This ship assisted in the boarding of Marco Inaros's personal ship by firing PDC rounds at its drive cone, before a breaching pod attached to the ship.[4] Ashford led the boarding party to capture Inaros, but they were all killed in the attack.

After killing Ashford and his entire crew, Inaros had his people strip the Tynan of all its vital components including PDCs, fuel pellets, hull armor, computer panels, data cores, and comms buffers. The ship was then abandoned despite being a good hull as a message to other Belters not to defy him.

After breaking off from the Outer Planets Alliance and becoming a pirate, Camina Drummer and her crews found the stripped Tynan adrift in space. Drummer had her crew fix the hull breaches and restore the ship to operational condition. Whilst this left a strain on their resources, it was successful, and the Tynan joined her small fleet, growing it to three ships. Racks of missiles were installed onto the ship in place of the missing PDCs. Camina later found Ashford's hidden stash in the airlock including a recording of him talking to Marco Inaros moments before his death.

Now being hunted by the Free Navy, the Drummer faction travelled to a wrecked Donnager-class to scavenge its resources and weaponry, including 2 PDC turrets. The Dewalt was detected by a Free Navy ship the Jotunn. The entire crew of the Dewalt were evacuated onto the Tynan along with as much of their resources they could get out on time and a single torpedo. A remote direct line of sight torpedo was prepared to fire at the Jotunn but when Michio hit the wrong button the Tynan was detected and forced to detonate the Dewalt’s drive, destroying the Dewalt along with the Jotunn and Donnager-class wreck.

Due to Michio’s mistake, Drummer contacted Liang Walker of Golden Bough, with the intent of offloading Michio onto his ship, the Inazami. Instead, the Inazami and accompanying Golden Bough ships joined the Drummer Faction, with the intent of raiding supply depots belonging to the Free Navy. As a result, the Tynan served as the flagship of Camina Drummer’s newfound fleet, and her personal gunship. The ship was instrumental in securing a Free Navy supply depot and relocating the captured supplies to Ceres Station, after which Drummer and her fleet entered into an agreement with UN Secretary General Avasarala to fight alongside the UNN and MCRN forces in the Free Navy Conflict, adding the Tynan and 7 other armed belter ships to their numbers.

The Tynan entered into the final confrontation with the Free Navy as both a belligerent and a subsidiary center of fleet coordination for the Drummer Faction. During the battle, it sustained heavy damage due to PDC fire from the Free Navy flagship, the Pella. This damage rendered the Tynan depressurized, with a damaged core and no functioning weapon systems. Drummer intended to set the Tynan for a collision course with the Pella, thus overloading the Tynan’s damaged core and sacrificing the ship in one final act to avenge the death of its previous captain, but the Inazami beat her to the punch. The Tynan was left to limp back to the remainder of the combined fleet, after which its fate is unknown; however, since Drummer survived the altercation, it can be assumed that her ship did as well. 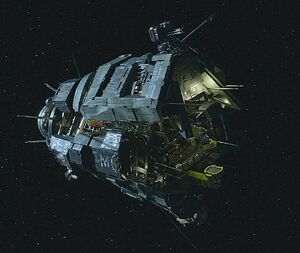 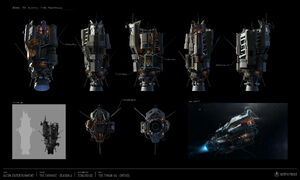 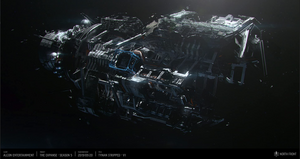 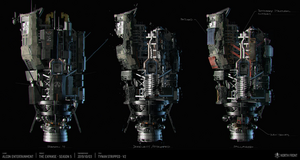 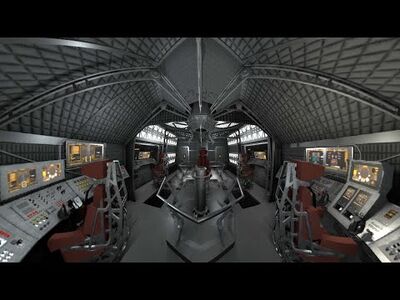