The Expanse Wiki
Register
Don't have an account?
Sign In
Advertisement
in: Articles needing citations, Weapons, Military,
and 3 more

"Assured Destruction"
"Gaugamela"
The UNN railgun platform is a model of orbital defense satellite purposed for first strike operations. It also can protect Earth from outside attacks. It is one of the United Nation's (UN) most powerful and accurate weapons.

Railguns are large, powerful mass drivers, cannons that use electroconductive rails and the Lorentz Effect to accelerate a dense metal slug at very high speeds, relying on mass and sheer speed to punch clean through their targets, rather than warheads like with missiles. These weapons require significant power (presumably supplied by a fusion power-plant) to fire and must charge briefly before firing.

The entire weapons platform is 81 meters long, with the visible barrel/accelerators taking up about two-thirds of the satellite's total length. This cannon is the peak of the UNN's (United Nations Navy) planetary defenses.

At the rear end of the platform is a number of thruster modules designed to compensate for the cannon's recoil as well as adjusting its orbit, avoiding atmospheric drag and the railgun recoil. RCS (reaction control system) thrusters are positioned across the chassis to turn and aim the weapon while also used to help it to relocate to a new position.

Seemingly automatically operated and remotely fed firing solutions from a command station, the satellite is built to be compact, being not much larger than a Truman-class's Farren-Pattern high-yield heavy railgun turret. Without the need for rooms to carry a crew or supplies, it simply houses a reactor, a control unit, and a magazine.

During the war, UN Watchtower satellites detected 5 MCRN Stealth C ballistic missile platforms and sent this information back to the UN Security Council. The UN Security Council ordered a simultaneous strike on all five of the platforms with five railgun platforms that were in the geosynchronous orbit of Earth, in order to eliminate the first-strike capability of the MCR (Martian Congressional Republic). Four out of five took out their targets, but the fifth railgun stalled momentarily due to an error activating its reactor. It could not destroy the final platform before it launched a burst missile, launching 20 nuclear tipped warheads dubbed "Planet Busters", with UNN defences taking out all but one of the them.

The asteroids flung at Earth by Marco Inaros, were coated in MCRN stealth composites, effectively enabling them to avert detection by the Sentinel satellite system. Thus, the UN was unaware of the threat and unable to prevent the impact of three asteroids on Earth, killing billions and severely damaging Earth's biosphere. When the truth about the impacts was revealed, the Watchtower satellites were subsequently linked to the Sentinel satellites system, therefore allowing all Earth defences to recognize and track the asteroids, intercepting the three remaining stealth coated rocks.[2] 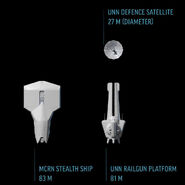 Scale to various ships (by Spacedock) 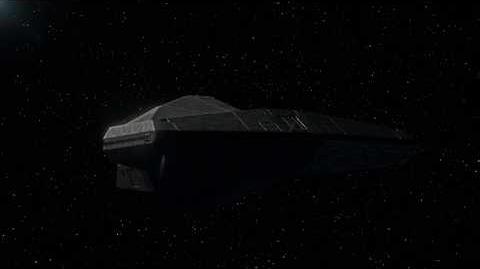