The United Nations (UN) is a sovereign federation of formerly-independent nation-states that spans across several territories within the Sol system and Milky Way galaxy.

It was founded in 1945 after World War II as an international organization facilitating cooperation in, among other areas, international law. Throughout the 21st century, Earth's national governments were on a continuous decrease in administrative power. After the damage done to the planet's ecosystem reached extreme levels, the world's nations decided to finally put aside their individual interests and international differences and achieve global unification. The UN Secretariat subsequently became the executive leader of all humanity and remained so until the Martian colony was granted independence from the UN.

The Security Council is the utmost executive branch and is formed of the Secretary-General and their immediate subordinates. The UNSC interacts with elements beyond Earth's sphere of control, like Mars, the Belt, and settlements in the outer planets, as well as independent interstellar colonies.

In 16 XTE, after a brutal bombardment of its capital planet, humanity's homeworld, Earth, the United Nations, along with the Martian Congressional Republic and the Outer Planets Alliance, founded the Consolidated Fleet, which effectively became humanity's emergency war-time government.

The idea of a United Nations system of global governance began in 1920 after the end of World War I. The brainchild of American President Woodrow Wilson, the purpose of the League of Nations was to spark economic development and to keep the peace after the destruction of the war. However, this organization would soon collapse without the support of the United States Congress and growing tensions caused by the Great Depression of the early 1930s. Its ultimate downfall came with World War II, which the League was completely unable to prevent.

The concept, however, had not been discredited: in 1941 when US President Franklin D. Roosevelt named the Allies the "United Nations", with the name being kept after after the Second World War's end as a peacekeeping organization comprised of the members of the military alliance. This was a significant time in human history, as it sparked growing tensions between the two superpowers of the time, the United States of America and the Union of Soviet Socialist Republics, which would lead to the space race and the development of many advanced technologies as part of a technological arms race. Had humanity not endured the Cold War, it is likely that humanity would have been even less prepared for the interplanetary, and later interstellar ages.

The UN began as an international organization that described itself as a "global association of governments facilitating co-operation in international law, international security, economic development, and social equity". It was founded officially on June 26, 1945 near the end of the Second World War at the signing of the United Nations Charter by 51 countries, replacing the previous "League of Nations".

By the end of the 21st century, humanity finally started reaching out into space. Permanent settlements were established on Mars and Luna, as well as the Asteroid Belt. While Earth was still divided between the various national governments, the UN wielded significant power. Extraterrestrial colonization was organized under the UN. As time passed, Earth's ecosystem was deteriorating, until the damage done reached dangerous levels. To successfully counteract this, humanity unified, with all national governments ceding their sovereignties to the UN. However, in some regions, most notably Afghanistan, the UN is widely distrusted and rebellion and dissent are commonplace.

The newly-established world government managed to decrease climate change and pollution to acceptable levels and enforced ecological recovery programs that are still active in the 24th century. Humanity was expanding, but no settlement farther than the Asteroid Belt was viable due to technological limitations. Mars, however, was becoming more and more populous.

Still stranded in the inner Sol system, overpopulation reached ridiculous levels on Earth by the end of the 22nd century - beginning of the 23rd century. Mars was vying for independence, but the UN rejected the colony's demand. It wasn't until the creation of the Epstein drive that Mars had an advantage which could force the UN into granting them independence.

Now free to expand into the outer Sol system, the UN established colonies on several Jovian moons, as well as Titan and Titania.

When the Donnager is destroyed by what is believed to be OPA ships and Mars declares war on the Belt, the UN stays neutral. Later, when Holden released information on the ships that destroyed the Donnager were actually made on Earth, United Nations Navy ships fired on Martian Congressional Republic Navy ships in Mars' orbit and destroyed the Deimos deep radar station. The MCRN then orders their ships in the system to return to Mars and declares war on Earth. The two fleets would engage over Mars, but the combat would be limited to the orbit.

Once the Eros security camera feeds go live, the knowledge of Protogen's involvement is made known. The UN begins arresting personnel and dismantling their network looking for clues. While looking, they discover that Fred Johnson was considered Protogen's largest threat and the UN forgives him of his past offenses.

In an effort to stop Eros from crashing on Earth, the UN fires all of its 3,573 planet based interplanetary nuclear missiles towards the station.[1] However, in order to give Miller more time, the OPA rerouted the missiles and would continue to fly those missiles around the system well after Eros crashed into Venus.

After the Eros incident, delegates from the UN, MCR, and OPA attend a peace conference on Ceres.

Eighteen months after the Eros incident, the MCR and UN were still in a bitter cold war. This changed when UNN and MCRN forces engaged in orbit above Ganymede, nearly sparking system-wide war. Tensions, however, dropped after the situation was clarified. (See Armistice between the United Nations and the Martian Congressional Republic)

After the wormhole network became accessible to humanity and granted mankind feasible superluminal travel, the UN began sending probes toward other star systems in hopes of establishing the first presence on an extrasolar body. The UN prepared colony ships for the anticipated land rush.

Eventually, probes transmitted back data of a perfectly habitable planet, which would later come to be known as New Terra. The United Nations granted Royal Charter Energy, an Earth-based company, the rights to chart and exploit the new planet, prior to attempting the planet's colonization. However, several Sol refugees were already in the process of establishing a footprint there. As such, an impartial team was sent out to mediate the problem and, later, deal with the alien phenomena governing the planet.

Eventually, colonization succeeded and encouraged millions to billions of other residents to move to a new system. This presumably doomed the Martian state, leaving the United Nations as the sole human superpower until the commencement of the Free Navy Conflict.

When the Free Navy hit Earth with three asteroids the planet suffered sever climate and economical disaster. The Secretary General disappeared and was presumed to have been killed. This led to the second highest ranked member of the UN government Chrisjen Avasarala becoming the Acting-secretary General.

The United Nations remained on the defensive with the Free Navy ship Azure Dragon continuing to direct asteroids against earth (although this time without success as Earth's defenses were on alert). When the independent ship Rocinante captured the Azure Dragon and brought it to Luna the ships systems were studied and it was learned the the Free Navy leadership was at Ceres. Acting secretary general Avasarala along with her makeshift government leadership decided to launch the UNN Home fleet to capture the station.

Thirty years after the Bombardment of Earth the United Nations economy has managed to recover. During this time the United Nations political strength along with that of the Martian Congressional Republic has weakened in the outer system and colonies with the Transport Union controlling all access to the Ring network.

When the Earth-Mars Coalition Navy and Transport Union fleet are defeated by the Laconian Imperial Navy the United Nations becomes a client State of the Laconian Empire.

Four years into subjection to the rule of the Laconian Empire the status of the United Nations was unclear. However, the office of Secretary-General of the United Nations no longer governed Earth with the planet now ruled by a Laconian selected Governor. The Military branch of the government was also disbanded. 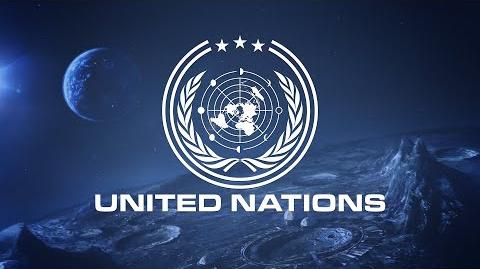 Retrieved from "https://expanse.fandom.com/wiki/United_Nations?oldid=56924"
Community content is available under CC-BY-SA unless otherwise noted.