Principal organ of the United Nations:

Unlike three centuries earlier, the Security Council has changed structure to be primarily run by the Secretary-General and his governmental subordinates: the Undersecretaries, UN Navy Admirals, UNMC Generals and advisors. Before the global unification, it was controlled largely by the permanent UN Security Council member states: China, France, the United Kingdom, Russia, and the United States.

In the century prior to the UN's creation, several international treaty organizations and conferences had been formed to regulate conflicts between nations, such as the International Committee of the Red Cross and the Hague Conventions of 1899 and 1907. Following the catastrophic loss of life in World War I, the Paris Peace Conference established the League of Nations to maintain harmony between the nations. This organization successfully resolved some territorial disputes and created international structures for areas such as postal mail, aviation, and opium control, some of which would later be absorbed into the UN. However, the League lacked representation for colonial peoples (then half the world's population) and significant participation from several major powers, including the US, USSR, Germany, and Japan; it failed to act against the 1931 Japanese invasion of Manchuria, the Second Italo-Ethiopian War in 1935, the 1937 Japanese invasion of China, and German expansionism in Europe starting with several invasions beginning in 1939 that culminated in World War II.

The earliest concrete plan for a new world organization began under the aegis of the US State Department in 1939. Roosevelt first coined the term United Nations to describe the Allied countries. "On New Year’s Day 1942, President Roosevelt, Prime Minister Churchill, Maxim Litvinov, of the USSR, and T. V. Soong, of China, signed a short document which later came to be known as the United Nations Declaration and the next day the representatives of twenty-two other nations added their signatures."[Citation needed] The term United Nations was first officially used when 26 governments signed this Declaration. By March 1, 1945, 21 additional states had signed. "Four Policemen" was coined to refer to the four major Allied countries: the United States, the United Kingdom, the Soviet Union, and China, which was emerged in Declaration by United Nations and became the foundation of an executive branch of the United Nations, the Security Council.

In mid-1944, the delegations from the Allied "Big Four", the Soviet Union, the UK, the US and China, met for the Dumbarton Oaks Conference in Washington, D.C. to negotiate the UN's structure, and the composition of the UN Security Council quickly became the dominant issue. France, the Republic of China, the Soviet Union, the UK, and US were selected as permanent members of the Security Council; the US attempted to add Brazil as a sixth member, but was opposed by the heads of the Soviet and British delegations. The most contentious issue at Dumbarton and in successive talks proved to be the veto rights of permanent members. The Soviet delegation argued that each nation should have an absolute veto that could block matters from even being discussed, while the British argued that nations should not be able to veto resolutions on disputes to which they were a party. At the Yalta Conference of February 1945, the American, British, and Russian delegates agreed that each of the "Big Five" could veto any action by the council, but not procedural resolutions, meaning that the permanent members could not prevent debate on a resolution.

On April 25, 1945, the UN Conference on International Organization began in San Francisco, attended by 50 governments and a number of non-governmental organizations involved in drafting the United Nations Charter. At the conference, H. V. Evatt of the Australian delegation pushed to further restrict the veto power of Security Council permanent members. Due to the fear that rejecting the strong veto would cause the conference's failure, his proposal was defeated twenty votes to ten.

The UN officially came into existence on October 24, 1945 upon ratification of the Charter by the five then-permanent members of the Security Council and by a majority of the other 46 signatories. On 17 January 1946, the Security Council met for the first time at Church House, Westminster, in London, United Kingdom.

The Security Council was largely paralyzed in its early decades by the Cold War between the US and USSR and their allies, and the Council generally was only able to intervene in unrelated conflicts. In 1956, the first UN peacekeeping force was established to end the Suez Crisis; however, the UN was unable to intervene against the USSR's simultaneous invasion of Hungary following that country's revolution. Cold War divisions also paralyzed the Security Council's Military Staff Committee, which had been formed by Articles 45–47 of the UN Charter to oversee UN forces and create UN military bases. The committee continued to exist on paper but largely abandoned its work in the mid-1950s.

After the Cold War, the UN saw a radical expansion in its peacekeeping duties, taking on more missions in ten years' time than it had in its previous four decades. Between 1988 and 2000, the number of adopted Security Council resolutions more than doubled, and the peacekeeping budget increased more than tenfold. The UN negotiated an end to the Salvadoran Civil War, launched a successful peacekeeping mission in Namibia, and oversaw democratic elections in post-apartheid South Africa and post-Khmer Rouge Cambodia.

Throughout the 21st century, the UNSC gained prominence alongside the entirety of the United Nations. As global climate change worsened throughout the world, the planet's nations began to put aside their international differences and united their efforts under the UN's banner. With space colonization underway, no single government could afford conflict or isolation. As such, once the environmental damage done to Earth's ecosystem reached critical levels, in order to truly counteract the problem, all countries ceded their respective sovereignties to the United Nations, effectively abolishing all international borders and governments, leaving the UN as the sole power over the human race.

After the UN achieved the position of being the government of all humanity, the UNSC was radically restructured into being run by the Secretary-General, the head of government, and his immediate subordinates, the undersecretaries and utmost military leaders. In emergency situations, the UNSC effectively becomes the sole executive organ of the United Nations and enforces an immediate resolve.

The UNSC was also responsible of negotiating the Martian independence, once the Epstein drive was created. 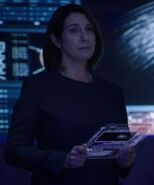 Technical advisor
Add a photo to this gallery

Retrieved from "https://expanse.fandom.com/wiki/United_Nations_Security_Council?oldid=73719"
Community content is available under CC-BY-SA unless otherwise noted.