Windmills is the seventh episode in the first season of The Expanse. It premiered on January 19, 2016 on Syfy.

Holden and crew realize they’re not alone on the Rocinante and find themselves up against a Martian military blockade. Believing all is lost, Detective Miller finds a new reason to forge ahead. Chrisjen Avasarala visits Holden’s family in Montana.

Despite being fired from Star Helix Security, Miller isn't giving up on the search for Julie Mao. In fact he's now a man on fire, blazing a trail of redemption as he looks to save the girl whom he believes might help him save himself.

Miller heads for the docks, where he confronts Anderson Dawes, the man who tried to have him killed. Dawes is impressed with Miller's newfound passion and determination, claiming that he might be a true Belter after all. However, there might still be something missing. "Maybe you haven't lost everything yet," Dawes says to the former detective. "When you do, you'll know your way home. And it will welcome you."

Miller breaks into Julie's apartment, where he quickly becomes frustrated upon realizing that nothing there will help put him back on the missing woman's trail. Just as he's about to throw in the towel, he spots a visitor outside the window: the sparrow that he fed outside his apartment earlier. Somehow, it's here.

Just then, Miller receives a message from his friend and colleague Inspector Sematimba from Eros, who tells him that the Anubis never showed up on Eros, though one of its short-range shuttles, the Anubis 1A, did, and is currently racking up dock fees.

As he prepares to leave the apartment, Miller finds Julie's necklace and takes it with him. He then returns to his apartment, where he collects a bunch of casino chips, the accumulated bribes of his career, and in a symbolic gesture of finally embracing his Belter blood, hangs up his hat. As Miller cashes in his winnings, he's confronted by Octavia Muss who wants to come with him to Eros. Miller tells her that he must take this journey alone and says goodbye to his former colleague and lover.

As a transport ship to Eros takes off for its destination, Miller is amongst the passengers, clutching Julie's necklace as he prepares for the unknown dangers ahead.

Meanwhile on Earth, Chrisjen Avasarala traverses the snowy farmland of Holden's family in Montana, where she visits Holden's mother, Elise. Chrisjen is struggling with the possibility that Holden may be responsible for the destruction of both the Canterbury and the Donnager, and she needs to know him as a person before labeling him as a terrorist.

Through Elise, she learns of Holden's upbringing. Holden was conceived by what Chrisjen calls a "cult of political extremists" as a trick to claim generational land rights, attempting to provoke an emotional response from Elise. Raised to one day take over the farm, 'Jimmy' prepared to defend and keep his family's legacy, told by his mother that "the land needed him"... until the day before his 18th birthday when Elise suddenly told him to "run".

Upon leaving the farm, Chrisjen contacts Sadavir Errinwright and tells him that while Holden definitely has "mommy issues and problems with authority", he's almost definitely not a terrorist mastermind. However, Errinwright tells her that he has already activated a black ops team to take Holden out, based on her spy's report, and that he's headed for Eros (he isn't, but Errinwright doesn't know that) on a converted MCRN gunship with fake transponder codes supplied by OPA bigwig Fred Johnson.

Errinwright got that intel from the stowaway aboard the Rocinante, Kenzo Gabriel, who was spying on Holden and Naomi back on Tycho. Amos discovers him and roughs him up in a crawlspace, where he's broadcasting a radio transmission. Upon being brought up to the ops deck, Kenzo reveals he's a consultant for Davila Aerospatiale, who has been stealing code and tech from Tycho Station for two years. He's also the spy that Chrisjen "borrowed" from Davila to keep an eye on Fred Johnson.

Much to Amos' chagrin, Kenzo ends up being handy when the Rocinante is approached by a Martian boarding skiff. Kenzo informs the crew that being a former Martian gunship, the Rocinante should have a series of code words that tell other Martian ships that they're involved with covert ops, and to back off. After some semi-brilliant stalling techniques from Alex, the crew finds the code words in the operations locker and the Martian boarding skiff turns around.

As the Rocinante continues on its course to the last known coordinates of Lionel Polanski (the sole survivor of the Scopuli, per Fred Johnson), Holden tells Naomi to get a leash on the increasingly volatile Amos or he's off the ship on the next port. He then locks up Kenzo in cell-like quarters, not telling him whether he's eventually going to be executed or not. 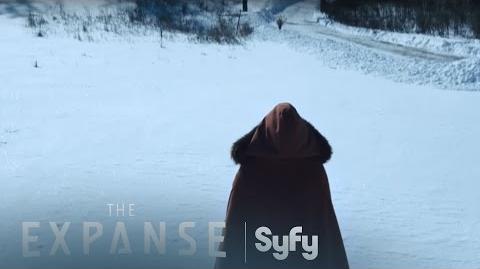 THE EXPANSE Inside The Expanse Episode 7 Syfy 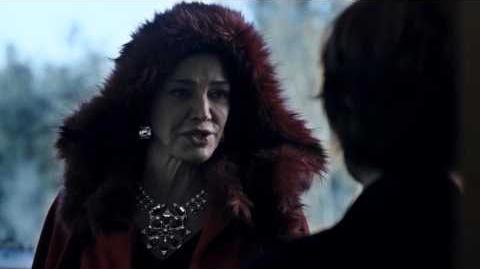 Inside The Expanse - Episode 7 THE ZONE SKY TV 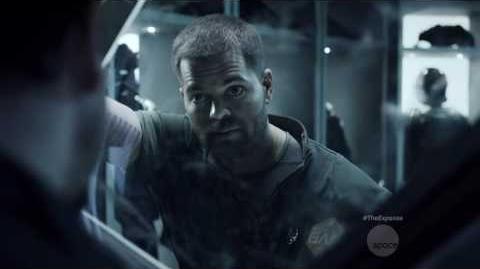 The Expanse - The Churn